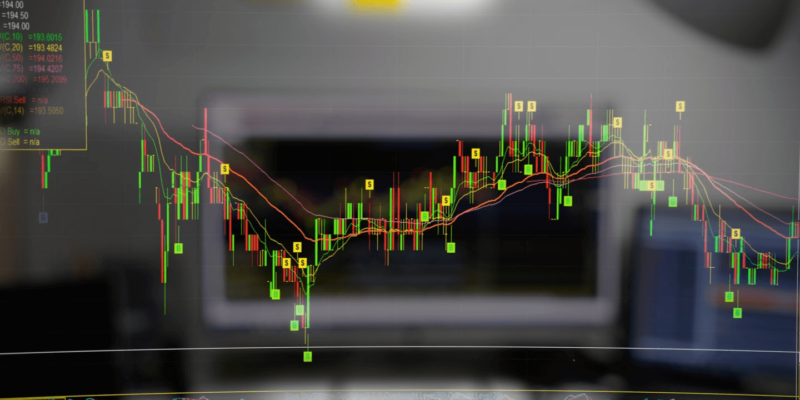 Let’s say you are a day trader. So you start trading when the London session opens. You’ve analyzed the charts, and you predict that a currency will move in a specific direction.

You place your trades confidently and monitor the market, and then, suddenly, your trade goes in the opposite direction. The market is moving extremely fast, and you just lost all your positions. You have no idea what has just caused these sudden spikes in price.

Every day, events are happening that influence the FX. In addition, there are specific economic indicators that a country monitors to use as a check on how healthy their economy is. It is like a scorecard for the country’s economy.

We call these fundamental indicators, and yes, they create massive volatility in the market, which means there are opportunities for traders to profit.

We have listed the top seven indicators that you must understand and follow if you plan to have a long profitable career as a trader.

How do fundamental indicators work?

Fundamental indicators forecast the intrinsic value of an asset by examining the social, economic, and political forces that could affect the exchange rate of a currency.

The fundamental indicators are a gauge for determining the health of a country’s economy. They are economic reports for a particular sector, such as unemployment rate, manufacturing data, consumer confidence, etc., which the government regularly releases. The data for each indicator reports the forecasted value vs. the current value.

The news release of these indicators takes place at predetermined times and dates every month. Upon the release, the market volatility is generally higher than usual. The volatility is dependent primarily on the significance of the indicator.

An example of fundamental indicators data release. This data is accessible to traders or investors on various financial websites on the internet.

The GDP is a measure of the economic health of a country. It is essentially the monetary value of all the goods and services produced in a country within a specific period.

The formula for calculating GDP is:

C = the sum of consumer spending

G = the sum of government spending

I = the sum of business’s capital spending

Therefore, GDP has a significant impact on the FX as it can affect the exchange rate of a country’s currency based on the above inputs that affect it. 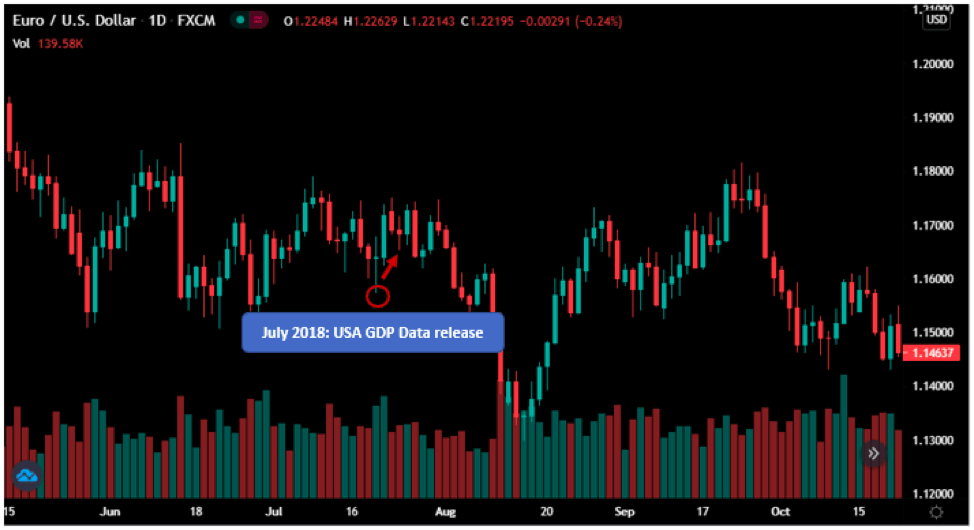 In the above image, the GDP was terrible, it affected the dollar, and the euro gained strength.

An important economic indicator for the US economy is the non-farm payroll or NFP report.

The NFP represents the total amount of US-paid workers, excluding those employed by the government, non-profit organizations, private households, and farmworkers.

NFP is probably the news event that is the closest watched by traders, investors, and financial speculators. The release of the NFP report is on the first Friday of every new month. As a result, the NFP release creates high volatility in the FX, and many traders use this as an opportunity to profit from the market.

The initial jobless claims could impact the NFP report. So if there is a consistent increase in jobless claims week on week, more and more people are unemployed, and NFP data would be negatively affected.

The data is released by the Department of Labour every week, and it creates significant movement in the markets.

Commercial banks are required by law to maintain a reserve of cash held in an account at the Federal Reserve Bank. When the banks lend this extra cash from the reserve to other banks, they charge interest. The FOMC (Federal Open Market Committee) determines this interest rate.

The FOMC sets this interest rate eight times per year, based on the economic and political conditions of the country.

The FOMC sets a target rate, and the banks can negotiate this rate if it falls within the FOMC’s target range.

The announcement of the federal funds’ interest rate impacts the US dollar, and traders, therefore, keep a close watch on this event.

The Purchasing manager’s index or PMI measures the economic condition of the manufacturing and services sectors in a country. The data is a survey of supply chain managers performed monthly covering 20 different industries. The PMI is a vital indicator of economic activity as it provides insight into business decisions, investors, and market analysts.

The PMI is measured based on these five indicators:

Traders follow the release of the PMI report monthly. An index value over 50 indicates growth in the sector, while a value below 50 shows contraction of the industry. Thus, traders base their trading decisions on this value upon the release of the data.

The release of the CCI occurs on the last Tuesday of every month. This data report represents consumers’ perceptions of their financial situation.

It is a gauge to determine the consumer’s confidence in the economy. The confidence survey comprises 3000 questionnaires, and Nielsen conducts this survey.

The CCI means that if consumers are optimistic about the current financial situation, consumers’ spending will increase, which is good for the economy. If, however, consumers are pessimistic, they would curb their spending.

Foreign investors are also not eager to spend if the CCI is pessimistic, which impacts the exchange rate of the country’s currency.

Therefore, the release of this data creates opportunities for forex traders.

The CPI is a measure of the cost of goods and services. It is considered a critical gauge for inflation. It is the weighted average of consumer goods and services prices, energy, food, and transportation costs. Economists also use the index to determine the cost of living for individuals.

The change in the CPI can influence the monetary policy, which will impact the exchange rate of the country’s currency. CPI is measured monthly, and traders follow it closely as it affects the value of the US dollar.

Now we know what the significant indicators that drive the forex market are. Many traders rely upon only the release of this data to enter the market and make money. Trading during news releases is a high risk, and many experienced traders have developed good strategies to trade during these events and are making good money from it.