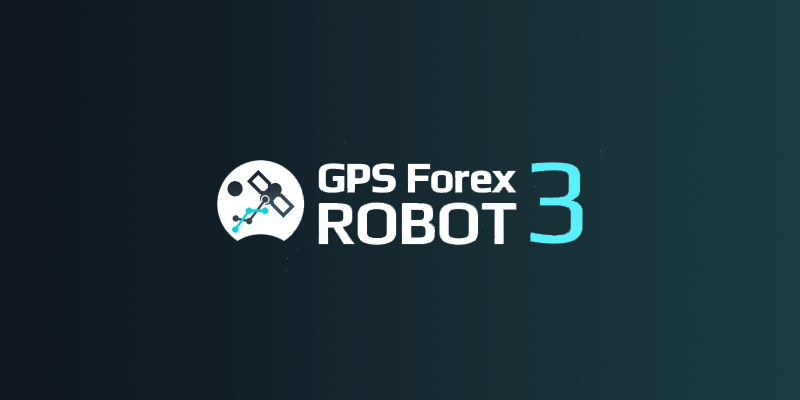 Today’s review is dedicated to a quite well-known EA – GPS Forex Robot 3. Staying for several seconds on their website, we are provided with this pop-up offer.

The developer asks us to provide our email address to get one free demo license and secret investor access to the trading results.

The main video on their website tells us about Mark Larsen, the developer of the robot. Due to the vendor’s claims, this video was recorded to change the way we traded. Mark tells us everything about his trading experience and trading way of making profits. He’s a person who has written hundreds of Forex systems reviews and produced plenty of Forex videos. In addition to this, he’s the owner of Forex EA Lab, Forex Tester, and Forex Systems Reviews sites and blogs. Mark is also known for his trading course called Secrets. bz. He’d tested many free and commercial trading forex systems.

The dev convinces us that generating 30% of monthly profit is possible with GPS Forex Robot. This EA is the result of 4 years of hard work of Mark and 2 programmers called Antony and Ronald. The robot is designed the way to sustain any market condition and ‘predict the short term movement with a very high probability.

It is worth mentioning that Mark is stuck by this stem for many years and does not hurry to jump from one project to another. He is willing to provide updates but the last one was conducted in 2015 so it has been a while since the most recent changes.

Let’s systemize what the developers told about functionality, features, and trading strategy behind GPS Forex Robot: 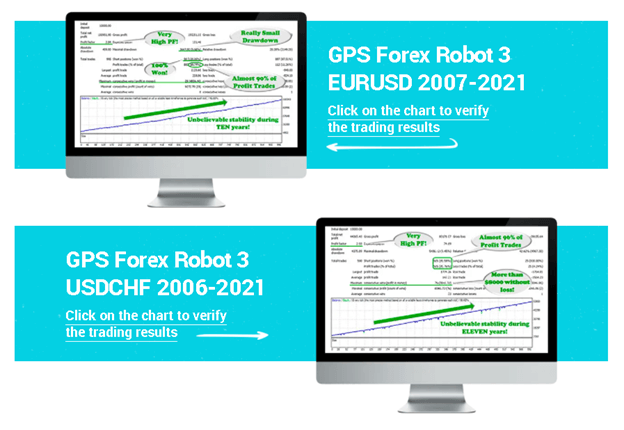 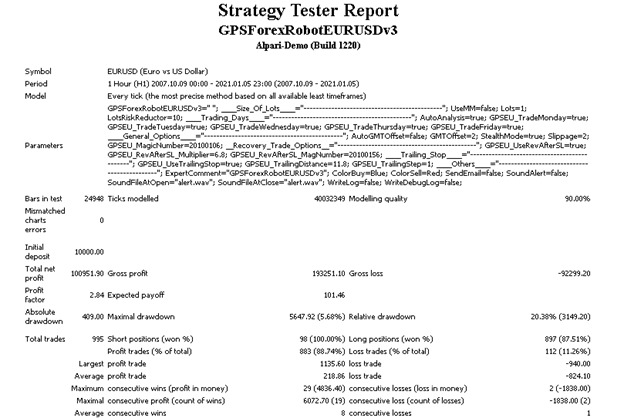 The developer provides many trading accounts to share the progress and profitability of his expert advisor. Let’s analyze one of them in detail.

It is a REAL (USD) account on FXChoice with 1:200 leverage. The robot trades on MetaTrader 4 platform. Its track record, as well as trading privileges, are verified. The account was added to myfxbook on March 26, 2012. Being deposited at $50K, the robot has brought $121091 of profit. There was no withdrawal since the date of account activation. Its total gain amounts to 242,18% when an average monthly gain is 1,13%. The peak drawdown was 30, 79%. Drawdowns above 30% are risky for any trading account.

The win rate of this trading account is high and the robot won 483 trades out of 508. The average loss is X11 higher than the average win, meaning that the risk/reward ratio is 1:11, which is too bad for trading. The profit factor is lower than the one we saw in the backtesting report. It is 1, 66.

It is a midnight trader with the highest activity at 12 a.m and 1 a.m. Most of the trades are opened on Tuesday (338trades)  and Thursday (149 trades).

For some reason, the dev decided to hide SL and TP levels. It trades with a fixed Lot size – 15 pips. However, if it loses a deal, the robot applies a Stop and Reverse trading strategy to recover. If a losing trade occurs, the robot senses the criteria for opening a much larger trade in the opposite direction. As you can see on the screenshot below, the hedging trade is 7 times larger in size than the losing one. The robot increases its Lot size to cover the previous losses. And although the vendor convinces us that the robot does not involve martingale, that is classic Martingale strategy: 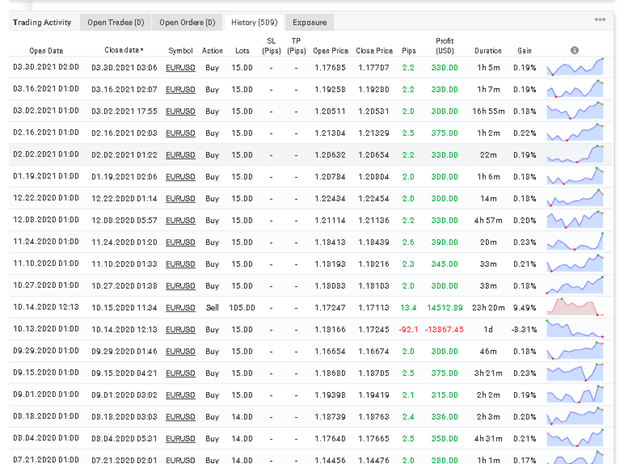 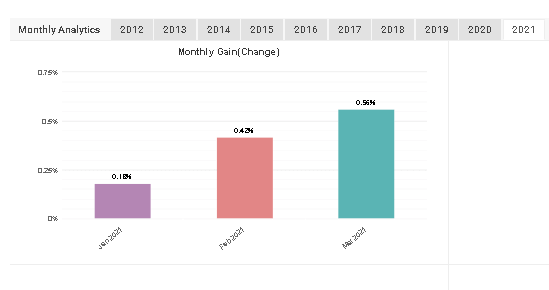 The average monthly profit in 2021 is 1,16%. It is nothing compared to the risks the robot trades with.

GPS Forex Robot is available in only 1 package, which comes for $149. It includes additional bonuses: free video tutorials, webinar recordings, and dedicated customer support. Every package comes with a 60-day money-back guarantee.

Payments are accepted via VISA, MasterCard, American Express, Discover, and even Bitcoin. The price is quite low compared to the other EAs available on the Forex market.

Is the GPS Forex Robot robot a scam?

This EA has its page on FPA with a 3-star rating based on 108 reviews written by their customers.

This customer warns us not to invest in the robot, claiming that it’s a total scam:

Here, we have a person who tells us that we ‘have to have an account size big enough to make the reversal trade’. Otherwise, it won’t work. 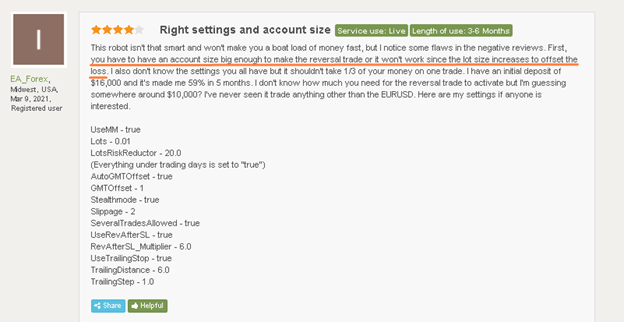 There are plenty of other negative reviews like these: 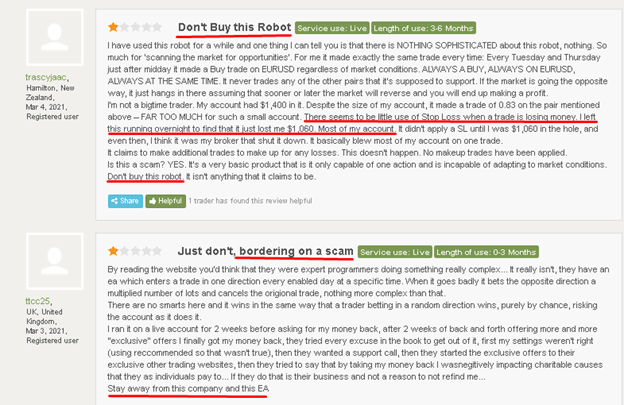 Traders are dissatisfied with the poor customer support and refund policy. They complain about ‘horrible’ reversal trade and Martingale that are ‘more than risky’. 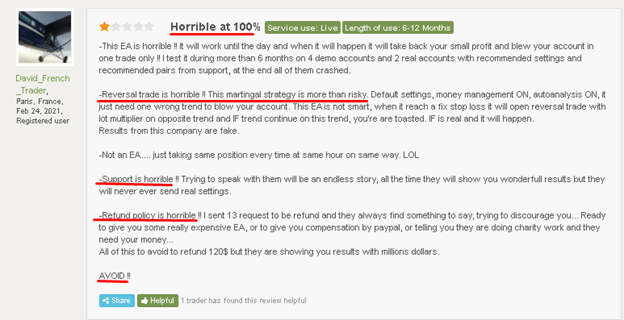 The dev promised 30% of monthly profit, but we hardly have 1-2%. Mark claims the EA does not use Martingale, but, as the trading results show, that is the trading strategy the robot uses to recover after losses. It trades without SL placing. The risk of ruin is sky-high.

Because of the risky trading strategies the robot applies, the GPS forex robot is capable of blowing even a very large account. It trades without SL. It does use a Martingale which is why the robot is capable of recovering big losses, and it does it successfully now. However, the risk of ruin is too high and in the case of 2 consecutive losing trades in a row, 10% of the account balance will be lost. The dev promises the robot can generate over 30% of monthly profit. However, it hardly provides 1, 13% of the monthly gain. We know nothing about the money management of this EA, like what trading risks will be good to trade or what Lot size is recommended for each $1K. What is the minimum deposit? As for the developer who is on the market for over 12 years providing this knowledge should be as clear as a bell. Are we ready to pay $149 to get 1-2% of the monthly gain? No, we aren’t.

Why Trade Forex: Where To Start And How To Achieve Efficiency